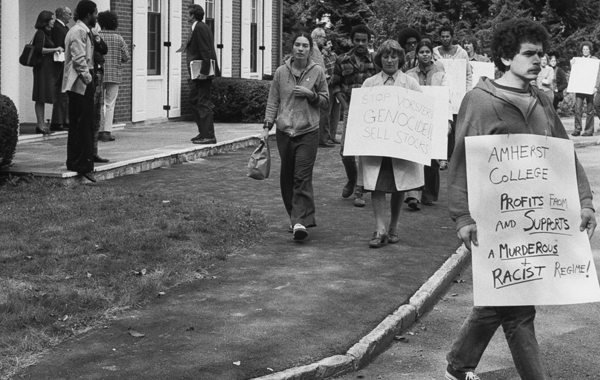 Student Economics: The Obstacles of Divestiture

Written by William Moessinger. Originally published as part of the Spring 2016 “Narrative” Issue. In 1977, student protestors at Hampshire College made history when they successfully protested for the divestment of companies headquartered in apartheid South Africa. For decades, economic forms of protest such as boycotting and legal sanctioning had been effective political tools, but at the height of the apartheid […]

By The Liberator Magazine Posted on May 2, 2016

Austin and the Future of Celluloid

Written by William Moessinger. The history of cinema is marked with countless examples of new technologies that started off as “temporary” trends and ended up as permanent industrial standards. Inventions like sound and technicolor were initially met with reluctance and skepticism by producers and artists alike. (Charlie Chaplin complained that sound “has spoiled the most ancient of the world’s arts…and […]

By The Liberator Magazine Posted on April 4, 2016

Written by William Moessinger. Studying English literature may involve hours of reading and writing thoughtful analyses that explore subtle textual details and overarching socio-political themes. To many, this seems like a daunting set of tasks, preferring the rigid certainty of mathematics and science. However, one English professor has spent months utilizing and examining quantitative data, as opposed to abstract critical thought, to […]

By The Liberator Magazine Posted on November 18, 2015

Written by William Moessinger. October 14 at 7 pm in the Glickman Center, the Academic Affairs committee of Liberal Arts Council organized “Voting in America,” one of several events comprising Liberal Arts Week, which sought to increase voter participation and political awareness among UT students. Students who attended were provided with free pizza and an opportunity to engage with Dr. Bob […]

By The Liberator Magazine Posted on October 21, 2015